Many of my post have been focused on several deep subjects concerning the road of life that I have been traveling. Some of you may be starting to wonder if anything actually happens in the garage? My trusty 2004 Dodge Dakota Quad Cab has seen its fair share of work the past eight months. Several years ago I did something I have always wanted to do, drive across the United States. Over a two week period the Dodge covered just under 6500 miles and thirteen states with no mechanical problems.

Unfortunately the Dodge Dakota is know for having ball joints that suddenly fail. Since I don’t like failure, especially at 65 to 75 miles per hour, I started some preventive maintenance. The following are several pictures I took while undertaking this major repair. 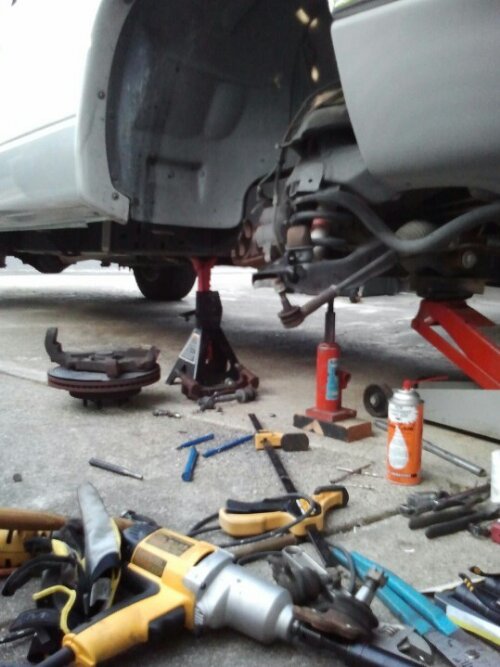 There may be some of you who may have noticed that it was daylight in the first picture of the ball joint repair, but the sun was long gone by the time I finished the passenger side.

Then there is my redneck repair for my rear drivers side passenger window cable failure…a piece of scrap wood cut to the correct length and two plastic tie wraps. Eventually a new electric window motor assembly was installed.

The trusty Dodge has also received a power steering pump, alternator, belt tensioner and idler pully, water pump, fan clutch, and a transmission rebuild (the only job I paid a mechanic to do). And as a bonus, one of my all time favorite photos of a brass phillips head screw with something very important missing.