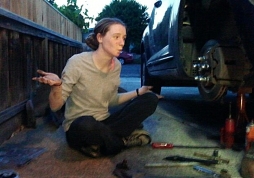 When my daughter (HAD) started driving it became apparent that I could continue to be a taxi, let her drive my truck or buy a car that she and her soon to be driving brother could share. Option three was chosen which started the search for a good used car. Being a gearhead it was also going to be a manual transmission (best thief deterrent option) so both kids could learn to drive a stick. I eventually found a one owner, always garaged 2001 Chrysler PT Cruiser that was owned by a fellow gearhead with one too many cars (ordered to sell one by his wife). My daughter’s friends and co-workers thought I was a pretty awesome dad to supply such a cool car for her to use. Eventually HAD

bought the car from me so she would not have to share a vehicle (that leads to another story with a totaled ending). I taught HAD how to do all of her own maintenance to save money, how to change a flat tire and jump start her car. PT, the car’s nickname, has been very dependable. Then came along a mysterious noise from the right front corner…a worn out ball joint. There was also a motor mount, that had been flagged during the replacement of the timing belt, that was on the list of things to replace. Of course HAD wanted to tackle this repair to save money and to learn more about car repair…with my help. Changing the lower control arms is not for the novice so I knew the learning curve was going to be

steep. Scheduling a time to do the repair became the biggest hurdle since HAD works two part time jobs and has been training for a half marathon this coming Sunday. The parts also needed to be ordered but they arrived with plenty of time to spare. It was decided we would start Friday evening after she arrived home from work with the hope it would be done before she need to go to work in the morning.

Now a slight detour to when HAD was knee high to a grasshopper. When my kids were little and they asked me for help to put something together (or take apart), I would show them how to do it, then take it back apart and hand it back to them to let them do it for themselves. I would supervise and coach as necessary. So since HAD wanted to learn she suggested we tackle this repair the same way I taught her when she was little. I would show her on one side then she would do the same on the other side.

Based on the repair manual instructions I estimated it would take 3 hours but did not take into account the “novice” factor. We were not very far into the job when HAD said, “I never realized how much brute force was required to work on a car”. The pry bars, dead blow hammers, brass drift and pickle fork were all new tools to her. HAD learned from an earlier repair that a lot of the time the mechanic is

working only by feel because you can’t always see what you are doing once the tool and your hands are put into place. As with most repair jobs I busted a couple of knuckles but as HAD was loosing a bolt the wrench slipped and she did a head plant into the fender leaving a red mark on her forehead. Fortunately she did not dent the fender. The old saying any job worth doing is one you bleed for held true. We finally finished just after 11:30 PM. A test drive proved all the work was worth the effort and PT is driving like newish. We had a lot of fun working together and HAD learned a lot. It is definitely easier to work with an extra set of hands on a complex repair. Next up for 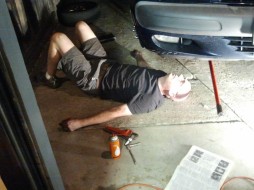 PT is an oil change which HAD can do on her own (when the guys at our local NAPA parts store see HAD come through the door they say, “it must be time for your 2001 PT Cruiser oil change). We will then change the power steering fluid and bleed the brakes. When all the work is done HAD will be all set for commuting to university for her last semester. HAD can now be my assistant when I change the lower control arms on my PT Cruiser…which is nicknamed GT.