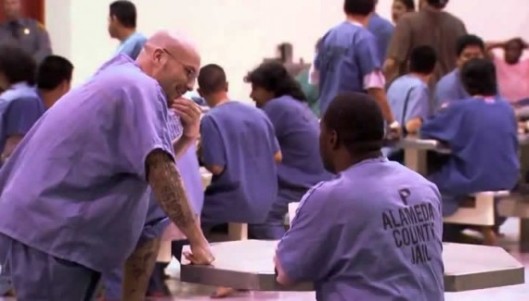 Yesterday evening I had the opportunity to face one of my greatest fears…being in jail. Fortunately for me I was there on a tour as part of the Livermore Citizen Police Academy (CPA) 24. During my CPA (23) I had a “legitimate” reason for not going on the tour. But I have to admit, my fear of “being in jail” was a huge factor in deciding which meeting I attended that evening. After my last experience with my friend who is a police officer, where he arrested a young woman suspected of DUI who had no criminal record, I decided I needed to see the other side of the Intake Area.

Santa Rita Jail is the fifth largest in the United States. They have housed many high-profile inmates over the years. Many who come through the Intake Area are repeat offenders and are well-known by the Deputy Sheriffs who work there. This tour was an all access tour were we saw inmates in all the different levels of security. Contrary to what many people think, including myself, this is not a resort atmosphere. The jail is state of the art and staffed by highly trained professionals who are only protected by the their physical strength and training when they are involved in their normal check of the inmates welfare. They work in a very hazardous environment where things can, and do, go bad very quickly.

Our first stop, once we were “inside” the jail, was the exercise yard which looked like any city park…minus the area for kids to play. We made a quick tour of the educational facility where inmates can work on learning skills that will hopefully lead to a better life after they get out. From there we visited a High Security Housing Unit of the women’s portion of the jail which had violent inmates in one section and inmates with mental health issues in another section. There is one to a cell and they are allowed out for only 1 hour per day. Next up was the Medium Security area in the same section where the women were allowed more freedom and shared a cell with another inmate…and you don’t get to choose your cell mate.

Then we moved on to the opposite side of the jail where the men are housed. We visited a Medium Security House with a bunch of really scary looking inmates. It was at this point that I had notice that each housing unit had what I will call “the smell of humanity”. The only way to escape the smell was to go outside and even then it remained in my senses for some time.

Then it was on to the kitchen. Besides the company that is contracted to prepare meals for the “guests” at Santa Rita Jail, the inmates who do well in jail can work in the kitchen. Now for a little family history. My dad spent his life from the age of 10 until he retired in the food processing industry. He started out milking cows twice a day and eventually managed a dairy plant. As part of my education, a family vacation usually included a tour of a dairy plant, cheese factory, bakery or any other facility that processed food. My dad was well-known in the food processing industry and was, and still is, a perfectionist when it comes to cleanliness in handling food. Having been along with him many times to the plant he managed, I know what a food processing plant looks and smells like when it is clean. The jail kitchen did not have the correct smell nor would it have passed an inspection by my dad…and obviously it did not pass my inspection either…but then again you have to keep in mind who works there.

Our last stop was the Mental Health Unit for men. Many of the men in this house either have mental issues that are due to their lot in life or because their brains are fried due to drug abuse. Many cycle in and out of jail on a regular basis. It was sad to think that these people are unable, or in some cases unwilling, to get the help they need. Some just need to remain locked up for the good of society.

Then we returned to where we started to pick up our belongings to return to our lives. I can now say that Santa Rita Jail ain’t Disneyland. It is definitely a place you never want to stay…zero stars.

4 thoughts on “Three Hours In Jail”