Yesterday morning I thought that I had slept through the 12:00 am to 1:00 am hour of the 1 Day 1 World Project, but upon checking this morning, I had not. Last night I was invited to a movie night in my neighbor’s backyard. Joe and Deborah have put up a large screen and have a computer, projector, and sound system they setup in their Victorian garden. Joe and Deborah then invite a bunch of friends with young children to come over to watch a movie, eat some popcorn, and indulge in snacks containing sugar, which then “fuels” the children. Being the “big kid” that I am, I accepted the invitation and joined the crowd. The movie was Epic which I had not seen. At one point all the parents were watching the movie while most of the kids were just playing on the lawn with hula hoops and glow sticks (the sugar was the source of all this energy no matter what the studies say). Since I had several things that I had not yet accomplished for the week, I made it past midnight. Since I was up I figured I would check-in on the Centennial Light Bulb.

I am happy to report that the Centennial Light Bulb is still keeping watch over LPFD Station 6. Since I am really a morning person, and the fact that Maggie expects her breakfast at the same time every day, I also captured this sunrise 6 hours later from my backyard. 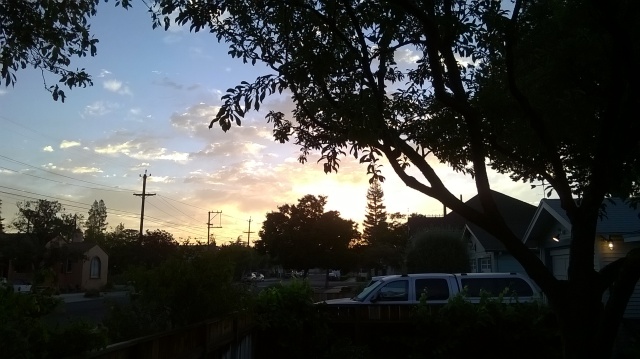